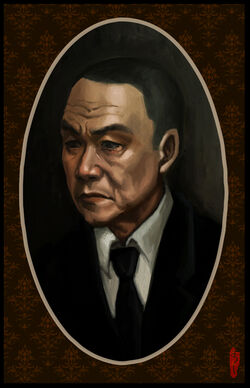 The Mayor's office is small and cluttered, but meticulously well kept, its two windows offering a view of the sunset and bathing the room in a warm glow; golden light streaming through the shades to scatter across the wall and over the many items and artifacts that fill the room. Hei looks up from his work to glance at you and nods, seemingly more to himself than anyone else, and watches as you approach his desk. A chair slides forward from the corner and to the fore of his desk without so much as a disturbance, its locomotion only aparrent once the seated mayor finishes a weary but graceful movement common in air bending. His surprisingly intense gaze meets yours, a stark contrast to his tired frame, and he waits for you to take a seat.

"So, you have come to learn of my past?" He somehow seems mildly pleased, although his face itself remains expressionless. "As a child, or even a young man, I never would have thought something so simple would have drawn so many ears. A man's life is better lived than told, but I'll do my best."

"I was born under the name 'Sashi', meaning 'The World', to a pair of considerate parents in the Southern Air Temple. I was also born an air bender, though fate would have me struggle to assert that fact at every opportunity. Indeed, my air bending was so weak that it might as well have not existed at all. Of course, any bending at all is enough to join the monks, but while my training began, so too did one of the most painful parts of my life. Bullies exist everywhere, even among the pacifist air nomads, and never was there a better tool for the task than that practiced among my people. You see, dangling a boy off a cliff with coiled air leaves no physical mark, nor does spinning him like a top until the blood rushes to his head, and these are but tame examples of the tortures I endured. As you can imagine, the mental and spiritual marks were deep, and while rage may not empower an airbender as it does a firebender, there is power in it enough for any man regardless of birth and skill. I needed no bending to smash the boy's face in, and I can't tell you conclusively whether or not he survived, but I can tell you with all certainty that I was permanently banished from my home; the tattoos that might have later marked my mastery of an ancestral skill never to grace my skin".

"I travelled for some time." He reveals a small spinning top and sets it loose upon the desk, its rotations taking it in wild circles but strangely never quite off an edge. "My wanderings were random and desperate, but something convinced me that I still followed the path set out by my people. I may have been banished from my home, but I was still an air nomad at heart, and nothing could take that from me. By then I was sixteen, and unfortunately I needed no one to take my heritage. Instead I took it from myself". The top careens off of the desk and falls to the floor with a small metallic clatter. Hei makes no attempt to retrieve it.

"Despite the many years that have passed since the Hundred Year War and the return of the spirits, my people are still a rare sight in many of the more disparate regions of the world. However weak my airbending may have been, it was still something special to be treasured or envied. It was a lack of the former, and an excess of the latter, that turned me from an Air Nomad into to something else entirely. At the time I had made my temporary home outside the walls of Ba Sing Se, and while the city prospered within, the land without was still subject to raids by lawless bandits from the nearby mountains. By this time I was cold and hungry, and for the most part tired of my adventures. I had come so far, yet  achieved so little beyond my own independence. Thus I hungered for purpose. A man by the name of Sektai, a fire bender and a bandit lord by trade, would give me exactly what I wanted."

"Sektai and his forces swept into the village where I was staying, cutting down any who opposed them, and capturing any who didn't. I was one of the former category, and as you can imagine my weak abilities were nearly useless against so many. However, they did draw attention to me, and I made it mostly intact to kneel before Sektai's feet. To my shock, he quickly burned away my bindings and offered not only a hand but a deal. My people's pacifist creed would have me ignore his offer, violence on this scale was horrific, not to mention against unarmed civilians with so little to call their own. Every fiber of my being told me to ignore the man and suffer his punishments, but I took his hand, stood, and shook it firmly. As powerful a firebender as he might have been, and as diverse as the skills available to other benders might have been, Air Benders remain the few capable of true unaided flight." Hei briefly nods towards an air glider leaning in the opposite corner. "The bandit lord needed an aerial scout, and there I was with the skills he needed. Surely such a role, while aiding Sektai's destructive intentions, was indirect enough that I still followed the ways of the monks. This was the first step on a very long and slippery slope".

"My bending allowed me to scout like an airship, but in absolute silence, and even if someone happened to look up, who would guess what I represented? As time passed, Sektai and his band grew in wealth and power, largely as a consequence of my skill. I could spot the best targets to attack, and any threats were visible to me from on high, allowing Sektai to set ambushes and crush even the best equipped and organized patrols. However, I came to realize that this success could not last forever, and indeed the Earth Nation army could have swept across us at any moment". He pauses for a moment, as if considering something. "

Community content is available under CC-BY-SA unless otherwise noted.
Advertisement