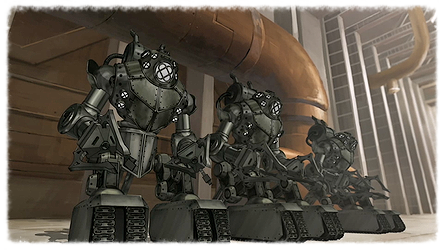 After the defeat of Fire Lord Ozai, the oppression and further suppression of the world was lifted away. One key thing that was suppressed was technological advancement. With the exception of a few select areas scattered around the world and anything that could increase the military might of the Fire Nation, technological advancement was severely frowned upon. However, after the downfall of the Fire Nation’s strive for global dominance and with this suppression lifted, things began to change.

Soon after, people with gifted minds began to think and create things the world had never seen. Things as volatile as the lightning of a firebender were able to be harnessed to provide, albeit limited, energy. Combining the aspects of airbending and waterbending, the use of steam and pressure was found to be able to control and power things as well. It was on these sorts of breakthroughs that Republic City and others like it were founded.

This technology was still based on bending and thus was inferior to it. It wasn’t until the struggle with Amon that technology was able to be harnessed apart from bending and in some cases able to even exceed it. With his defeat, even most of his followers abandoned his cause; but the technological advancements made by them were not. In fact, they were expanded and refined to the point where they didn’t just rival benders but clearly surpassed them.

Upon this and other self-delusions, Avatar Kiryi sparked the Rebellion. With the goal to take down the mantle of technology and bring back the rule of benders, she led her followers into a civil war. Her end was met quickly however, but her cause went onward in time. As we all know, Avatar Michu was eventually the one to end the Rebellion, but Kiryi still got her way.

In order to avoid the outcome that came about from Kiryi, Avatar Michu and the Councilors from all the nations decided on a global outlawing of certain technologies. While not all forms of technology are under this outlaw, it does span a wide variety of things. Primarily, any sort of technology that could be used for combat or war is completely illegal. Michu’s hope was that someday the world would grow passed the need for this; but even to the day of his death, he felt it was necessary to avoid unneeded conflict. That being said, it is very possible that things could change in the future; it is up to the people to decide.

Retrieved from "https://avatarrp.fandom.com/wiki/Avatar_Roleplay_Wiki:Technology?oldid=114895"
Community content is available under CC-BY-SA unless otherwise noted.