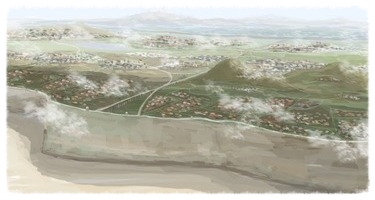 During the Rebellion followers of Kiryi poured into the villages and towns trying to recruit people to their cause. With the disarray their world had been in, many took up Kiryi’s ideologies and began to riot against non-benders and technology. The nation was once again thrown into chaos. Zaheer would be proud. However with the death of Kiryi and the coming of Avatar Michu to Republic City, things changed once again. Many snapped to their senses and realized what they were doing was wrong over the years and began to try and fix the world they were destroying. With the help of Michu, political stability was regained within the nation and the republic flourished.

The new Earth Republic began to flourish. The citizens were happy with the state of affairs they were in and the impoverished nation began a period of great economic growth. Technological improvement was highly respected. Over the years, the republic has grown to be a considerable power in the world; having the largest standing armed forces as well as a formidable navy. Though it hasn’t remained a peaceful place at all. The government has grown corrupt and focused most of their attention on the capital city of Ba Sing Se, leaving the rest of the country to fend for themselves. Various crime organizations and vicious bandit tribes reign over the various regions, confronting the army at every turn. Even though the military is forced to prioritize the capital, Ba Sing Se suffers from some crime as well.

On top of their own internal issues, the Earth Republic also experiences frequent raids from surprisingly large wastelander cells on its southern borders. The Earth Republic military works to maintain a number of high security prisons in various remote areas of the country. But unfortunately, occasional breakouts have still taken place. The nation’s strong army works diligently to maintain order. Lake Laogai serves as one of the republic’s most notorious prisons. Places like the Si Wong Desert and small villages are terrorized by tribes of sandbenders and bandits while bigger cities like Omashu must deal with crime families.

While terrorist factions who decide to rise against the corrupt government can be seen all over the country, trying to rebel against their rules with chaotic acts of destruction. While most of them would love to strike Ba Sing Se directly, it is far too well protected by the army. Hence why government facilities and military posts serve as their usual targets.

The army maintains outposts all over and tries to encourage its young citizens to enlist for service. The military is highly respected for it’s numerous missions to defend the country. Though they’ve been often eluded, outwitted and outmaneuvered by the organized crime cells. The navy focuses on defending the borders from the wastelander invasions, but they’ve likewise been bested and are sometimes not capable of preventing their incursions. Their military power is spread thin. The reason why such a powerful army is sometimes unable to prevent the invasions. Their biggest failure was their attempted invasions on the Southern Wastes. But the people of the Wastes have proven their immense mastery over naval warfare. The Earth Republic military uses propaganda to make all Wastelanders seem like evil monsters, even going as far as to hunt down and imprison anyone they find who is from the Wastes. Unfortunately many of them who are looking for peaceful lives must traverse through these lands to reach the United Republic where they’re welcomed with open arms.

Retrieved from "https://avatarrp.fandom.com/wiki/Avatar_Roleplay_Wiki:Earth_Republic_History?oldid=114905"
Community content is available under CC-BY-SA unless otherwise noted.